Rejected Titles for the Friday the 13th Film Series

Friday the 13th Part XI: Jason and the Argonauts

Saturday the 14th: A Special Day, the Day We Get Ready for Sunday

Alien vs. Jason vs. Predator

Jason vs. the State of California

The Bride of Jason

The Life-Partner of Jason 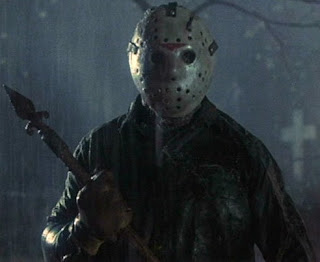 Today I wanted to refer you guys to a maestro. A genius, if you will.

Matt Clayton and I have been friends for about 10 years. When I met him in 1998 he was just out of high school and we both were doing plays at a terrible D-list theater in the area. But even at the time, the guy could turn poop into a Rembrandt. He was a miracle worker. A multi-talented multi-tasker. He turned more than one show at that awful theater into something worth watching because of his acting ability and costume and set design magic. And when the theater couldn't contain his creativity, he's host Murder Mystery parties and when you showed up, he'd dress or accessorize you until you looked authentic. He took pride in his productions. More than anyone I had met up until then.

One Halloween, he single-handedly made campy Batman, Robin and Catwoman costumes for me and our (crazy) friend to wear. We were a hit everywhere we went. One year, for his little sister's birthday, he merged three of her favorite people into one photography session and gave the photos to her as a gift. Who were her favorites at the time? Harrison Ford, Jared Merritt and me. She is a sweetheart and so we lovingly obliged to sit for Matt in various Ford film looks/settings such as Star Wars, Indiana Jones, American Graffiti and Six Days, Seven Nights. He pulled it off and made us look great. This was before the days of widespread Photoshop use, mind you. And his sister loved the gift.

Matt and I stopped hanging out as frequently as life took us down different paths. (My path was very bumpy, dusty, swervey and often had the potential to deliver hepatitis to travelers. This path was of no interest to Matt.) But we re-kindled our friendship at Provo's ComedySportz in 2001 where he was and still is THE go-to guy for announcing the shows, adding sound effects and perfectly placing music (good music) where needed to effect the crowd. I was puzzled at how he became so good at this particular job in such a short time. Still am.

But then Matt decided to start a magazine. Yep. Being awesome at style, fashion, photography and technology made him perfect for founding and being Editor-In-Chief of Square Magazine. The hottest magazine in Utah County for hip single students. (He even let me contribute to a few issues.) I am always impressed by the look and feel of Square Magazine to this day. Even if the content isn't always directed to me anymore, being old and married.

Today, Mr. Clayton continues to do all of the above while running his own photography business. The thing about Matt and his photographic work (and I know a lot of photographers) is that he is always learning and always getting better. He plays with light, shade, wardrobe, location. He works with great models and when you see his results, you feel like you know the people he shot even if you don't. He even makes a family photo sitting look like it should be a part of a designer print ad. Like it belongs on a bigger stage, so to speak. Like Times Square or something.

But of course it looks wonderful. Matt's life has been dedicated to following his passions and turning them into something great. Something more. Something memorable. It's no wonder his photography, one of his oldest passions, is so amazing, so focussed, so welcoming and genius. It's that way because it's who Matt Clayton is. And I'm proud to call him my friend.