Caught your eye? I would hope so.

Now to develop a TV series based on this title. THAT would be something.

Anyway, the idea comes from http://deanhunt.com/the-ultimate-blogging-secret/

Let's examine some of the possible combinations:

1. The Awesomeness of Gummi Bears. I think your audience on this one would be limited to kids ages 3 to 11. Not enough appeal for a wide audience.

2. Internet Pirates. I don't think pirates are that funny. (They enjoyed a brief comedy resurgence in 2004 but have declined since.) The internet has never been funny in and of itself. Well, except that one night it KILLED at the Comedy Store in 1973. But the image of a scurvy-having sea criminal sitting around in boxers using his neighbor's Wi-Fi gives me a good chuckle.

3. Internet Zombies. Aren't we all now just internet zombies? Think about it.

4. Awesome Internet Dinosaur Ninjas. Despite the chart's data, I don't see this being that marketable or post-worthy. Perhaps it's my combination. Maybe ... if I just ... ok ... Internet Dinosaurs and Ninja Awesomeness. That's better. I can just see Al Gore sitting around with his solar powered computer, sipping wheat grass and being amused at the posts on RealUltimatePower.net

5. Awesome Ninja Zombies Battle Robot Pirates. There really is officially nothing better. This combination kills all pirates and literally eats the Gummi Bear collective. I am honestly going to start writing a pilot for this TV series right nnnnnnnow.

What are some of the combinations you think are the best or most potentially awesome?

UPDATE: Reader "Maht!" suggests "Dinosaur Zombie Awesomeness". He writes "Because dinosaurs need more motivation to eat brains and be scary, which equals awesomness. This would make for a great theme for a log flume ride let alone a movie or blog post." Thanks, Maht!. I heartily agree.
By Unknown 2 comments:

An Exercise in Hilarity or Animal Cruelty: Pug Vader 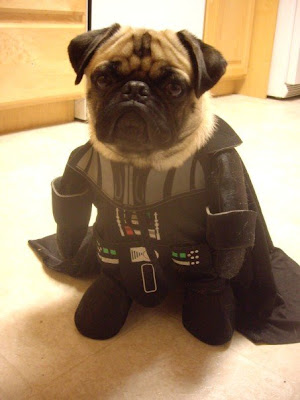 Amelia says, "And ... this is what you get for peeing on my kid's bed."
By Unknown No comments: